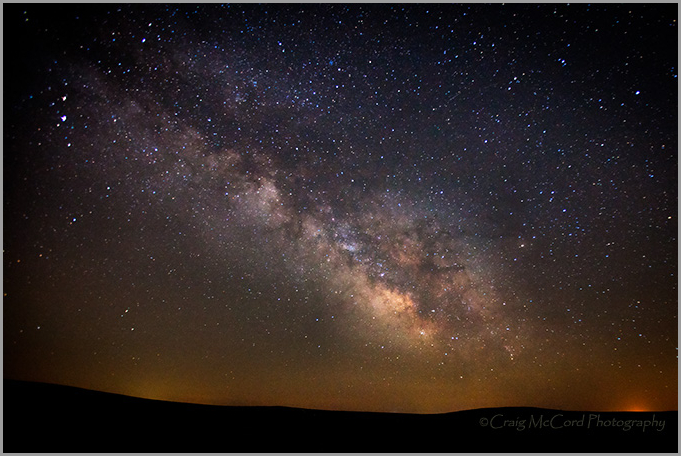 Previous Next
← previous day next day →

I recently took advantage of forecasted clear skies to visit the Flint Hills area of Kansas in hopes of getting a shot of our Milky Way Galaxy. The conditions were particularly favorable because we were approaching a new moon, which was scheduled to set late afternoon. The absence of moon light would improve the conditions by ensuring a darker sky to view the stars. The Milky Way sets and rises just like the moon. This time of year it rises in the south east. One way to assist locating the central region of the Milky Way is to locate the constellation Sagittarius the Archer. This constellation represents Sagittarius, the half human half horse centaur. Greek legend states that he changed himself into a horse to escape his jealous wife. Amazing what a man will do because of a woman. Anyway, I digress. The Greeks had a heck of an imagination because I can’t figure how they attribute certain star configurations to these mythological forms. I read that some now suggest the main stars in this constellation actually appear to form the outline of a tea pot. I like this simple description without the legend stuff. When you finally know what to look for it is as easy as seeing the Big Dipper, almost. Anyway, the galactic center of the Milky Way is just beyond Sagittarius, and this evening I found it at about 160 degree azimuth at about a 30 degree elevation. In a dark sky you may see what seems like a faint fuzzy light stretching across the sky. This fuzzy or cloudy looking band is actually billions of stars that make up the disk of the Milky Way Galaxy.

A friend my son insisted recently there are no more than a couple of hundred stars in the sky. He has apparently never ventured out of the city at night. There are around 3,000 stars we can see at a given time in the night sky with our naked eyes. And, there are up to 300 billion stars in our galaxy, according to recent estimates (I didn’t count).

During this excursion I took a number of images and in some tried to introduce foreground elements, trees or fences, or some other object to add context. I could not really find what I thought worked for me though. In some cases the other elements seemed to distract from the main emphasis, the Milky Way. In the end the image seen here is the one that worked for me because of the simple form of the hills. They added context and visual weight without distracting from the main subject.

In order to get the exposure I needed I set the ISO to 3200 and exposures were between 30 and 45 seconds. The lens focal length for this shot was 16mm at f2.8. I had to focus on some distant object for infinity, which was difficult at times due to the darkness. The long exposure and high ISO setting would naturally introduce some noise so I had to ensure the noise reduction features were set on the camera. This actually doubled the time each exposure required because of the noise reduction process. In post processing, I adjusted curves and levels to further bring out the structure of the Milky Way.

This is a view you certainly won't see in night sky of the city.

Thanks for viewing my blog. I am always interested in comments and will try my best to answer questions.

Spring Dogwood and Wildflows in the Missouri Ozarks, 29-31 March 2013
Rocky Mountain National Park Photo Workshop, 28-30 June 2013
View a preview of "Pursuit of Light", a book of my images paired with writings of Kirk Hunt "Pursuit of Light"[

@guillaume: Know what you mean.